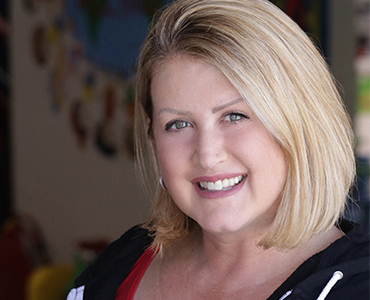 Dina Kimmel studied business marketing and accounting in her college years, but it is her mother’s intuition, her passion for helping those with special needs, combined with her entrepreneurial spirit that led to the creation of We Rock The Spectrum Kid’s Gym. After a career of more than 17 years owning her own clothing stores, her life changed when her second child, Gabriel, was diagnosed with autism spectrum disorder in 2009. Dina sold her businesses and dedicated her time to finding the best care for him while still making sure her first child, Sophia, received equal love, support, and attention.

As Dina hired speech therapists, child behaviorists, and occupational therapists in an effort to provide Gabriel with early intervention and targeted treatment, she was faced with limited hours, a lack of resources, and discord within her family. She struggled to find an environment where she felt safe bringing Gabriel, without always having to apologize for his behavior, and a place where Sophia enjoyed going as well.

With this thought in the back of her mind, she still focused her efforts on Gabriel’s therapy, which eventually led her to begin building a sensory gym made of therapy equipment in her own home. Both of her children immediately loved playing in the gym, but Dina knew she couldn’t stop there. She knew that this gym needed to be offered to the families who lacked the means. So, with a desire to get back into the working world, and a strong passion to be an advocate for other parents and children in her situation, Dina took to the streets looking for a place that she could turn into the first We Rock the Spectrum. On September 19th, 2010, the first We Rock the Spectrum Kid’s Gym opened its doors in Tarzana, California. On the wall it read “Finally a place where you never have to say I’m sorry.”

Immediately, Dina saw great support and demand from her surrounding community, and in less than five years, We Rock the Spectrum became a worldwide franchise. With new locations opening every month, We Rock the Spectrum is a one-of-a-kind kids’ gym that is committed to creating an inclusive environment for all children while fostering learning, exploration, and sensory-safe experiences.

Today, Dina’s passion for working with children with severe disabilities, such as nonverbal children, children with devices, or children who require IEPs, has led her to donate much of her free time to advocating for these children and their parents and families. As her franchise continues to grow, her mission stays the same and she continues to be the voice for those in need. Originally she thought she was going to be the mother of two children, but today she says she feels much more like a mother figure and advocate for the whole of her Tarzana community, as well as worldwide.

Dina resides in Los Angeles with her husband and two children. She has been featured on NBC and CBS news, the Huffington Post, LA Parent, and Autism Live. In 2014, We Rock the Spectrum Kid’s Gym was honored as the Grand Club Sponsor for Autism Speaks Walk LA, and is now a nationwide sponsor for Autism Speaks. She has since been the 2014 recipient of The Comerica Bank Women of Entrepreneurship Award, given to her by the LA Lakers. We Rock the Spectrum was nominated for San Fernando Valley Business Journal’s Business of the Year Award and was the recipient of the United Chambers of Commerce Small Business Award.